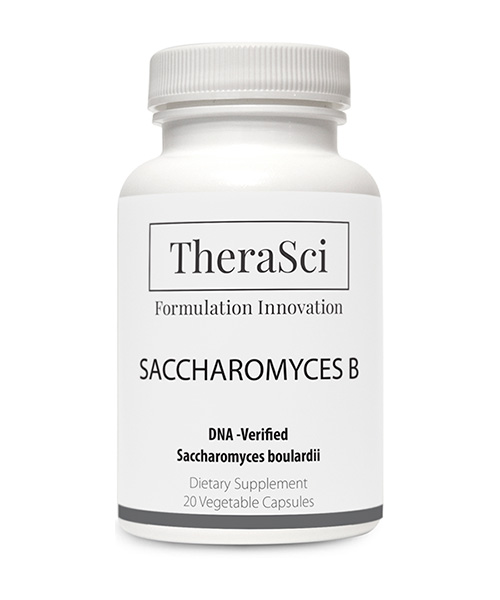 Saccharomyces B is manufactured using a process that involves controlled temperature and low vacuum, eliminating the shock of freeze-drying. The drying procedure, which does not modify the water content of the preparation, slows down aging, cell deterioration, and contamination, leading to increased stability and greater resistance to gastric acid. This process does not require or contain dairy products or lactose.*

Saccharomyces boulardii (S boulardii) is a natural, non-pathogenic yeast that may help support and maintain the healthy ecology of the small and large intestines. In a 2010 systematic review and meta-analysis of 31 randomized placebo-controlled treatment arms in 27 trials comprising 5029 adults, “S boulardii was found to be significantly efficacious and safe in 84% of those treatment arms.”[1] A study also suggested that S boulardii can be used safely and effectively in children three months and older.[2] A double-blind, randomized, placebo controlled study of children ages 3-59 months produced statistically significant positive results suggesting that S boulardii may play an important role in supporting normal gastrointestinal function in young children.*[3]

Extensively researched and published in European and American peer-reviewed journals, Saccharomyces boulardii appears to function through several mechanisms of action. With regard to maintaining normal GI function and transit time, research suggests that S boulardii secretes a protease that may assist in directly degrading bacterial toxins and stimulating antibody production against those toxins.[4-6] S boulardii is also believed to support the natural inflammatory response, exert a trophic effect on intestinal mucosa, and positively support the immune system.[3] These actions further support and help maintain the normal health and function of the intestinal brush border.*

This probiotic yeast appears to support normal gastrointestinal flora and integrity[7,8]; promote production of intestinal enzymes and secretory IgA[9]; and support cytokine balance through its effects on IL-8, IL-6, IL-10, NF-kappaB, TNF-alpha, and PPAR-gamma.[6,10,11] Research suggests a role for S boulardii in the production of health-promoting short-chain fatty acids, including butyrate.*[12] Research suggests that butyrate, in turn, plays an important role in maintaining the integrity, function, and normal flora of the intestines.[13]

Following a multi-dose study in healthy volunteers, the concentration of S boulardii in feces increased rapidly, reaching a steady state by day three in all subjects. Following completion of administration, the S boulardii population declined consistently and was cleared from the bowel within five to seven days, indicating that the probiotic yeast did not permanently colonize the gastrointestinal tract.[14] Saccharomyces B provides 10 billion colony-forming units of S boulardii in a two-capsule dose.* 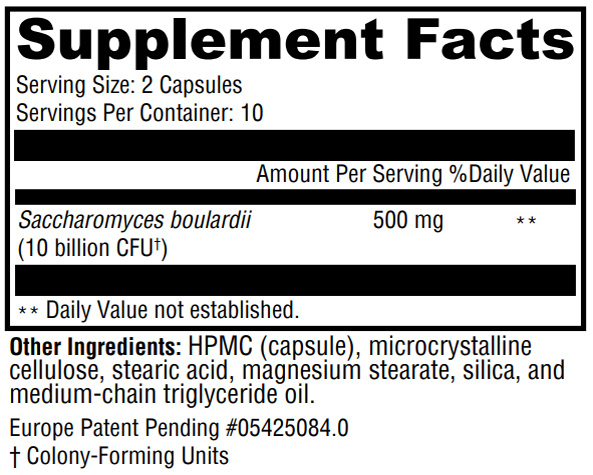 Take one to two capsules per day, or as directed by your healthcare practitioner.

Consult your healthcare practitioner prior to use. Not for use by infants under three months of age. Do not use if you have severe immune suppression or are taking antifungal medication. Do not use if tamper seal is damaged.