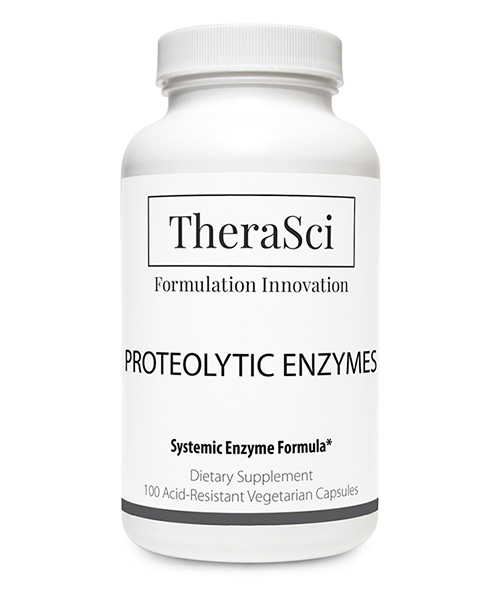 Proteolytic Enzymes affects cytokine and eicosanoid balance, promotes joint comfort, and supports the body’s ability to maintain tissue integrity. Proteolytic enzymes in Proteolytic Enzymes may break down proteins and complexes that can be produced as a result of injury and tissue damage. This activity is believed to aid nutrient and oxygen delivery and may help speed the body’s ability to recover and heal. Acid-resistant capsules facilitate systemic delivery of enzymes.*

Enzymes are complex proteins that catalyze metabolic reactions throughout the body, and sufficient levels are necessary for optimizing many bodily functions. Though the body naturally produces its own supply of enzymes, production can vary with age and biochemical individuality.*[1]

Proteolytic enzymes, also known as proteases, specifically break down proteins into peptides and amino acids through the process of “proteolysis.” For example, proteases produced by the pancreas assist in the digestion of dietary protein. Some proteases, such as trypsin, are then resorbed, transported in the bloodstream, and resecreted by the pancreas. Enzymes in circulation are bound to antiprotease alpha-2-macroglobulin to protect them from being degraded by other serum proteases and to retain their enzymatic activity.*

Proteolytic Enzymes is a proteolytic enzyme formula designed to be absorbed across the gastrointestinal mucosa and into circulation.[2] When distributed systemically, proteolytic enzymes can break down proteins and complexes generated during injury and tissue damage. This action supports the body’s normal recovery process.*

In vivo studies suggest that trypsin and other proteases, though normally confined to the bloodstream, are able to enter the site of injury.[3] At this site, they are able to support immune function and affect cytokine production. Research suggests that orally administered proteolytic enzymes may exert this beneficial effect as well.[3,4] It is thought that they function as proteinase-activated receptor (PAR) modulators, a feature which allows them to contribute to immune and cytokine balance.[5] Proteolysis of intestinal microorganisms may contribute to the immunostimulatory effects of oral proteolytic enzymes as well.*[6]

Proteolytic enzymes have been used worldwide for decades to support health and healing. For example, research on bromelain (an enzyme obtained from pineapple) suggests that it positively affects eicosanoid production and balance.[7-9] Furthermore, it is suggested that bromelain supports the body’s innate and adaptive immune function,[10,11] signifying an effect beyond that of proteolysis in some cases.*

Serrapeptase (also known as serratiopeptidase) is an enzyme produced by microorganisms in the gastrointestinal tract of silkworms. Silkworms use it to digest their cocoons. Multicenter, double-blind studies suggest that serrapeptase significantly supports tissue integrity and comfort and is well-tolerated.[12,13] Pancreatin in Proteolytic Enzymes is a mixture of pancreatic enzymes containing chymotrypsin, trypsin, amylase, and lipase. The papain present is a proteolytic enzyme derived from papaya fruit.*

The effect of combining various proteolytic enzymes has been studied closely for decades. For example, the combination of trypsin and chymotrypsin has a history of use in the support of tissue integrity and healing, with positive results in early double-blind trials.[14-16] The combination of bromelain, trypsin, and rutin has been researched and found to produce positive results as well.[17] For example, in a six-week, randomized, double-blind, parallel group trial (n=90), oral proteolytic enzymes were well-tolerated and positively affected clinical outcomes, including Western Ontario and McMaster Universities osteoarthritis index (WOMAC) and Lequesne’s index scores, as efficiently as other compounds studied.[18] Another randomized double-blind controlled study using systemic enzyme therapy (a combination of bromelain, trypsin, and rutin) reported “remarkable differences” in tissue comfort and integrity in subjects who received the enzyme therapy.*[19]

Proteolytic Enzymes contains a combination of pancreatin, papain, rutin, bromelain, trypsin, chymotrypsin, and serrapeptase in acid-resistant capsules that are designed to withstand gastric juices, ultimately allowing direct absorption into the bloodstream. For best results, the formula should be consumed on an empty stomach.* 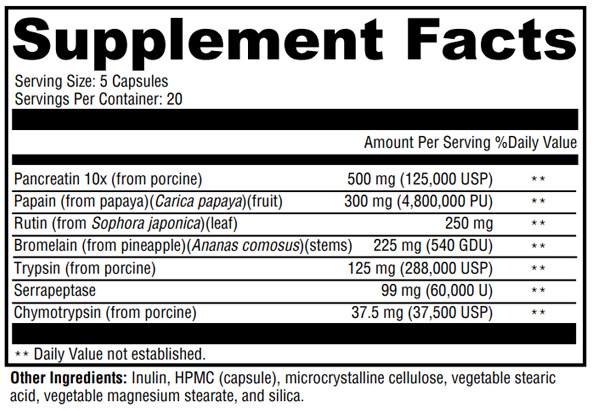 Take three to five capsules daily on an empty stomach, or as directed by your healthcare practitioner.