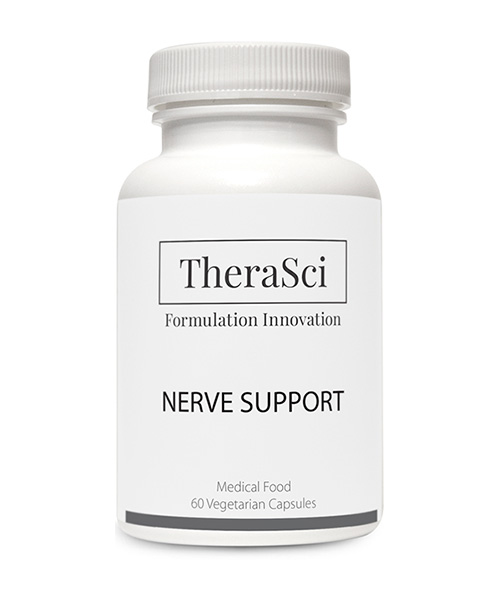 Nerve Support is an orally administered medical food* for use only under the supervision of a physician for patients with metabolic nutritional impairments associated with peripheral neuropathy and microvascular complications.

Nerve Support is specially designed to support the function of the microvasculature and the health of peripheral nerves. Bioactive B vitamins, provided in clinically proven levels, influence homocysteine metabolism and oxidative stress to positively impact the production of nitric oxide (NO) and support healthy endothelial function. All of these factors play vital roles in supporting the flow of blood and oxygen to peripheral nerves.

The underlying pathology of peripheral neuropathy involves a complex interaction between vascular (e.g., nitric oxide) and metabolic factors (e.g., hyperglycemia, hyperhomocysteinemia) that converges on nerves and the endothelium of the peripheral microvasculature.[1-5] In addition, increased oxidative stress is a unifying factor seen in the etiologic pathways.[6] Patients suffering from peripheral neuropathy can present with loss of protective sensation, neuropathic pain, and, in some cases, lower extremity ulcerations.

Nerve Support combats oxidative stress, and it supports blood flow by promoting healthy endothelial function and facilitating the production of nitric oxide (NO)—a potent vasodilator naturally synthesized in the body. NO is required in blood vessels to relax smooth muscle cells. Relaxation of vascular smooth muscle allows blood vessels to expand and blood to flow freely. Healthy blood flow in the microvasculature facilitates the delivery of essential nutrients and oxygen to the peripheral nerves, which, in turn, allows them to perform normal functions.

5-Methyltetrahydrofolate (5-MTHF)
5-MTHF is the primary biologically active isomer of folate. Unlike supplementary folic acid, which requires enzymatic reduction by the methylenetetrahydrofolate reductase enzyme (MTHFR) to become biologically active, 5-MTHF is able to penetrate cellular membranes without being metabolized. This is important because a segment of the population is unable to effectively convert folate to 5-MTHF due to a genetic polymorphism.

Therapeutically, 5-MTHF is used to reduce homocysteine levels and to improve vascular endothelial function through its influence on NO. Clinical studies have shown that direct supplementation with 5-MTHF reduces homocysteine levels and increases plasma folate levels more effectively than folic acid. Folic acid supplementation alone has not been shown to reduce intracellular homocysteine. Inborn genetic variations (polymorphisms) in the MTHFR gene are the most common genetic causes for elevated homocysteine levels. Furthermore, research has shown racemic 5-MTHF to be seven times more bioavailable than folic acid.[7] In other research, (6S)-5-MTHF was more effective than folic acid in increasing total plasma folate concentrations in subjects with the TT and CC genotype of the 677C→T mutation of MTHFR.[8]

5-MTHF has beneficial effects on endothelial function and vascular superoxide production because it prevents peroxynitrite-mediated oxidation of tetrahydrobiopterin (BH4) and improves endothelial NO synthase (eNOS) coupling.[9,10] Reduced levels of tetrahydrofolate contribute to uncoupling, and uncoupling turns NO synthase into a superoxide radical-producing enzyme.[4] The effect of local, intraarterial administration of 5-MTHFon the forearm blood flow of 23 patients was studied.[11] 5-MTHF improved NO-mediated vasodilation (from 53+/-30 to 88+/-59 M/C%, < 0.05). This suggests that 5-MTHF can be used to improve NO status and support healthy endothelial function.[4,10] Folate/5-MTHF has been found to exert direct antioxidative effects—against superoxide and peroxynitrite, for instance—and contribute to the restoration of impaired NO metabolism.[4,12]

Quatrefolic®
In Nerve Support, 5-MTHF is provided as Quatrefolic, the glucosamine salt of 5-MTHF. Quatrefolic is a new dietary ingredient (NDI) that shows enhanced stability and bioavailability when compared to the calcium salt form of 5-MTHF. In a direct comparison between Quatrefolic, (6S)-5-methyltetrahydrofolate calcium salt, and folic acid in rats, Quatrefolic demonstrated a much higher absorption rate within the first two hours (1918.8, 1061.9, and 614.0 nmol/l plasma, respectively).[13] In a single-dose, balanced, two-sequence, twoperiod, two-treatment, randomized,crossover human study, Quatrefolic showed better bioavailability (+10%) than (6S)-5-MTHF calcium salt (Ca-L-5-MTHF).[14]

Vitamins B6 and B12
These B vitamins are provided in their activated forms—pyridoxal 5’-phosphate (P5P) and methylcobalamin—for optimal bioavailability. They are required for synthesis of nerve-signaling molecules (amines) and for facilitation of the body’s normal nerve repair mechanisms, including the production of the myelin sheath—the lipid-enriched membrane that insulates and protects nerve fibers and enhances nerve mpulse conduction. B6 and B12 are commonly used in combination with folate to support healthy homocysteine metabolism. Both animal and human studies have demonstrated an inverse correlation between homocysteine levels and endothelial function, perhaps through impairment of vasodilation mediated by endothelium-derived NO.[9,15]

P5P-dependent enzymes are involved in many biochemical reactions, including the transsulfuration of homocysteine and decarboxylation of amino acids that yield biogenic amines (neurotransmitters). Research suggests that P5P may inhibit formation of advanced glycation end products and has a protective effect under homocysteine-induced oxidative stress.[16-18]

Methylcobalamin is provided as MecobalActive™, a highly pure form of patented methylcobalamin that does not use any harmful solvents in manufacturing. Methylcobalamin’s neuroprotective effects may be mediated by the methylation cycle. The combination of supplemental folate and vitamin B12 has been shown to reduce homocysteine more than folic acid alone. Clinical trials suggest the combination of 5-MTHF, P5P, and methylcobalamin can reduce symptoms of neuropathy. Furthermore, research has demonstrated that B12 acts as an efficient intracellular superoxide scavenger and improves glutathione redox status.[19,20]

Take one capsule twice daily, or as directed by your physician.

To be used under the supervision of a physician only. Individuals taking medication should discuss potential interactions with their physician. Do not use if tamper seal is damaged.