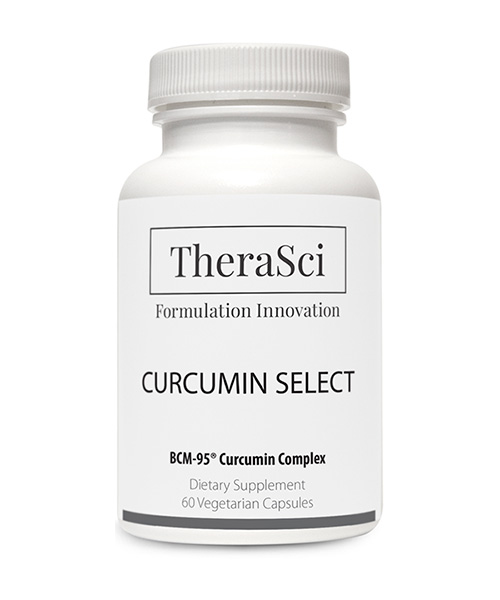 Curcumin, the principal curcuminoid in turmeric, has been the subject of vast research in recent years. The pleiotropic nature of curcumin’s biological effects make it an interesting compound to researchers who study common chronic health concerns, such as those associated with joints, the cardiovascular system, glucose metabolism, brain function, mood, and cell-cycle regulation.*[1-6]

The mechanisms underlying curcumin’s effects are diverse and have not been fully elucidated, but it is known that curcumin has powerful antioxidant activity and that it has multiple molecular targets, including transcription factors, cell cycle proteins, cytokines, chemokines, enzymes (e.g., COX-2), receptors, and adhesion molecules.[7] These effects make curcumin applicable to a wide array of clinical presentations.*

Patented Formulation: BCM-95®
While the beneficial effects of curcumin are hardly arguable, an area of intense research is how to make curcumin more bioavailable. Poor absorption in the gastrointestinal (GI) tract, rapid metabolism, and rapid systemic elimination are characteristics of commercially available curcumin preparations. While investigating a way to overcome these challenges, scientists discovered they could take advantage of the synergism between the curcuminoids and the sesquiterpenoids (essential oils) naturally present in turmeric.[7] This discovery resulted in the development of BCM-95—a 100% natural whole turmeric extract composed of 86% curcuminoids (curcumin, demethoxycurcuminoid, and bisdemethoxycurcuminoid) and 7%-9% essential oils.*

The Bioavailability of BCM-95
Animal and human studies have demonstrated the superior bioavailability of the BCM-95 curcumin composition.[7,11,12] In a pilot crossover study, Antony et al compared the bioavailability of three forms of curcumin: BCM-95, normal curcumin, and a non-controlled release curcumin-piperine-lecithin formula. The data demonstrated that the absorption of curcumin from BCM-95 was fast, peaked at 4.5 hours with a gradual decline, and that curcumin was still detectable in the blood at eight hours. The other formulas showed slower curcumin absorption with an earlier peak and rapid disappearance from the blood after 4.5 hours. The relative bioavailability of BCM-95 was approximately 6.93-fold higher than normal curcumin and 6.3-fold higher than the non-controlled release curcumin-lecithin-piperine formula. According to the researchers, the results of this study indicate that the BCM-95 curcumin is “absorbed early and retained longer” compared to other forms.*[7]

Unlike other bioavailability-enhanced curcumin formulas, BCM-95 does not contain any non-turmeric compounds; no phospholipids, excipients, additives, carriers, nanotechnology, or bioenhancers are used.

BCM-95 Studies
To date, BCM-95 is backed by more than 21 published studies and over 12 years of research conducted around the world. Unlike many commercially available curcumin formulas, the bioavailability, safety, and efficacy of BCM-95 curcumin has been demonstrated in numerous preclinical and human studies. The following areas illustrate the massive body of research behind BCM-95 in relation to common health concerns: colon health[13-17], mood and stress[5,18-20], cognitive health[6], joint health[2,21], urinary health[22], cytokine modulation[23,24], prostate health[25-27], breast health[28], and cardiovascular health.*[29]

As an example of the findings, in an eight-week randomized, double-blind, placebo-controlled trial (n=56), ingestion of 500 mg BCM-95 twice daily resulted in significant improvements in mood-related parameters during weeks four to eight.[20] These findings are supported byrelated research into curcumin’s effect on mood.[18,19] In another study, the effects of BCM-95 on joints were evaluated. The BCM-95 group (500 mg for eight weeks) showed the highest percent of improvement in scoring related to joint health and comfort.*[2]

In addition to the aforementioned published studies, eight human clinical trials using BCM-95 for periods of 21 days to one year are currently underway at prestigious institutions, including several at Baylor University Medical Center at Dallas.

Safety and Dosing
Turmeric has been safely consumed for thousands of years, and its medicinal compound curcumin has an outstanding safety profile. Phase I clinical trials using up to 8 g/d for four months did not result in discernable toxicities.[30] Mild gastrointestinal distress can sometimes accompany curcumin supplementation, but this may be minimized by consuming the supplement with food. Current doses in clinical trials using BCM-95 range from 500 mg/d to 1000 mg/d.* 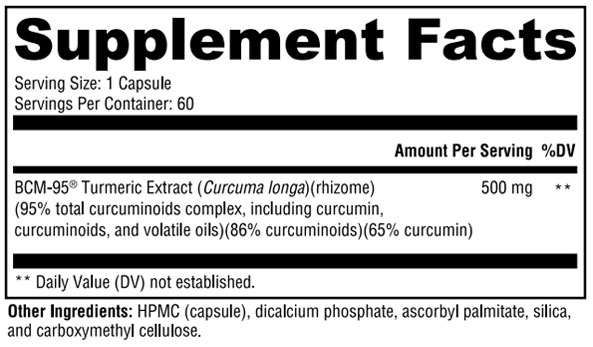 Take one capsule twice daily, or as directed by your healthcare practitioner.