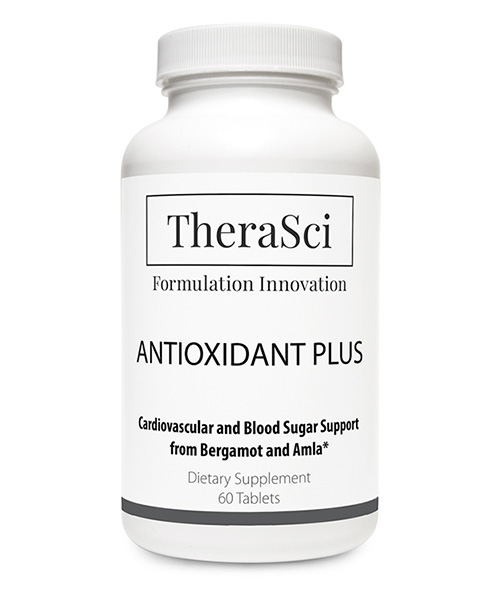 Antioxidant Plus combines the antioxidant activity of bergamot (Citrus bergamia) with the tonifying superfruit of amla (Phyllanthus emblica). Bergamot is used traditionally in Italy to support cardiovascular wellness. Amla is revered in Ayurveda for its role in cardiovascular health, and this use has been validated in modern human clinical trials. Research suggests that the lipid- and glucose-balancing flavonoids of bergamot and amla help maintain healthy cholesterol levels already within normal range and support healthy blood glucose metabolism.*

Bergamot
Bergamot is a type of citrus fruit primarily grown in the southern Italian region known as Calabria. It has been used traditionally to benefit a wide variety of human health functions particularly cardiovascular health. Essential oil of the bergamot peel is used widely in the food and cosmetic industries, whereas the juice flavonoids have been suggested to be the components responsible for benefitting cardiovascular health.*

Amla
Amla, or Indian gooseberry, is a bright yellow-green fruit that comes from the Phyllanthus emblica tree. In the ayurvedic tradition, amla is considered a rasayana, meaning it is used as a rejuvenator to achieve homeostasis and build vitality. Native to India, P emblica also grows in tropical and subtropical regions throughout Asia and the Middle East. The polyphenol-rich berries are traditionally used in applications related to supporting the body’s natural defense system.*

Mechanism of Action
The mechanisms proposed to be responsible for the beneficial cardioprotective effects of bergamot include the maintenance of healthy lipid and blood glucose levels and the support of normal resistance to oxidative stress.*[1,2]

Reviews of the mechanism of action and influence of bergamot juice extract on lipid and sugar metabolism at the molecular level suggest that naringin and neohesperidin initiate the release of adenosine monophosphate-activated protein kinase (AMPK), a central regulator of glucose and fatty acid metabolism. Neoeriocitrin is proposed to inhibit phosphodiesterases (PDEs), which are involved in the regulation of energy metabolism and lipolysis through the cyclic adenosine monophosphate (cAMP) molecular pathway. It is also submitted that brutieridin and melitidin act as direct hydroxymethylglutaryl coenzyme A (HMG-CoA) reductase inhibitors involved in deterring excess cholesterol synthesis in the liver. Bergamot flavonoids have also been found to inhibit quinone oxidoreductase 2 (QR2), an enzyme implicated in catalyzing oxidation-reduction reactions involving xenobiotic (foreign) and biogenic (produced in the body) substrates. Preliminary data suggests that QR2 enzyme activity contributes to the effects observed in lipid and glucose metabolism. Although the individual polyphenolic compounds in bergamot juice extract appear to exert specific effects, the authors propose that the synergistic effects from collectively influencing multiple molecular pathways are what ultimately benefit cardiovascular health.*[1,3]

Phytochemical studies on amla indicate that the primary biologically effective constituents in amla berries are gallic acid, ellagic acid, emblicanin A and B, phyllembein, quercetin, and ascorbic acid—all of which exhibit antioxidant activity. Providing balance between pro-oxidant (generation of free radicals) and antioxidant (quenching/scavenging of free radicals) homeostasis has been suggested to be the mechanism for how amla supports general health. Although used historically for a wide variety of applications, amla is favorably regarded in traditional medicine and validated in modern scientific literature for its role in supporting endothelial function, the body’s response to oxidative stress, lipid and blood glucose modulation, and the management of healthy hsCRP levels—all of which contribute to cardiovascular health maintenance.*[4-8]

Cardiovascular and Blood Sugar Support
Numerous clinical trials have suggested that bergamot juice extract functions via metabolic pathways in the liver to maintain healthy cholesterol levels and support healthy blood glucose metabolism.[9,10]There is a limited amount of data that has assessed the use of supplemental bergamot juice extract in generally healthy subjects; however, there are studies in athletes. A randomized, double-blind, placebo-controlled study evaluated the effect of BPFG on cardiovascular parameters and exercise performance in male cyclists (n = 30) utilizing 650 mg of BPFG twice per day for four weeks. Significant differences were observed between pre-and post-intervention baseline endothelial NO (nitric oxide) levels, suggesting that BPFG plays a role in cardiovascular adaptive mechanisms by way of a vasoprotective response.*[11]

Like bergamot juice extract, amla has been studied extensively for its role in supporting cardiovascular health with much of the research utilizing subjects with pre-existing conditions. However, emerging science in healthy subjects has recently contributed to the body of evidence supporting amla. A study in healthy volunteers (n = 12) evaluated the effect of 500 mg/day of Capros®, an amla extract, on mental stress-induced changes to cardiovascular parameters. A statistically significant decrease in aortic augmentation pressure (from 6.6±2.15 to 4.6±2.02[P < 0.01]) and in augmentation index (AIx) (from 120.1±12.80 to 116.2±12.63[P < 0.05]) suggested that amla would be beneficial for arterial health and thus support cardiovascular wellness.*[12]

Another study (n = 12) evaluated the effect of Capros on cardiovascular parameters following the administration of cold pressor tests (CPT) in healthy human volunteers. The CPT test
is known to affect cardiovascular parameters in human subjects and is based on a short-term stimulation via immersion of the hand into ice-cold water. Study subjects were administered 250 mg twice daily and showed significant improvement over baseline and placebo.*[13]

Follow-up trials are needed to solidify clinical use of bergamot juice extract and amla for cardiovascular wellness and blood sugar support and to further validate their use in healthy populations.* 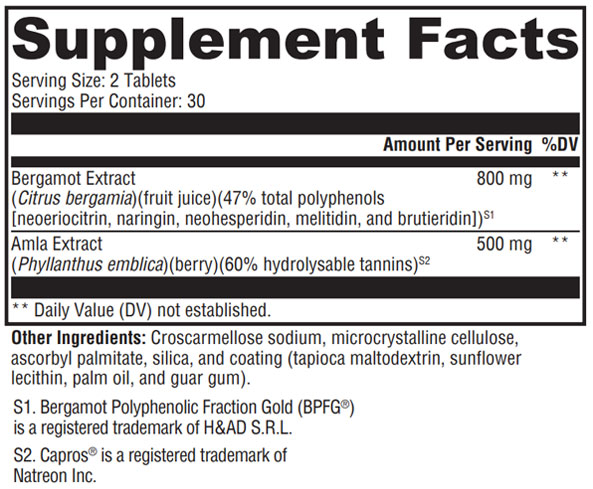 Take one to two tablets twice daily, or as directed by your healthcare practitioner.